I am putting my fingers in writing the article on first day of year 2017 with Microsoft Flow Demos I presented in last month at SharePoint Fest Chicago, December 2016.So, as you guys are aware of Microsoft Flow is a tool to mash-up two or more different services together and get your job done within a few clicks and that’s what Business users or customers demands for, we will only look for the various flows demos here.

I tell you, its not just about using what you have in cloud but Microsoft flow can advance the workflow process by integrating with your own application or talking with your own service and I am sure this will enhance in future and become very prominent tool for automating the workflow process in order to prove the Microsoft’s mission “mobile-first, cloud-first world”, however its certainly not the replacement of the current workflow tools such as SharePoint Designer, Nintex etc.Each has their own advantages, while MS Flow is meant to communicate with different cloud services without any fuss of integration or coding.Its a configuration-first tool that automates tasks via configuring the process using variety of actions and triggers in browser based designer.What you require is just Browser and “Work/School Account” or “Microsoft Account”.

So, let’s get started with the scenario in order to leverage the Flow capabilities including the integration of Power Apps.In this example, flow will communicate various cloud services such as Excel, One-drive for business, twitter, common data model, outlook, SharePoint online and Yammer.

Flow Scenario: As manager, its quite challenging to boost/promote your team members while they are working in the complex tasks, In order to maintain the healthy team environment, we should define the process and I have tried something as below which can go well with Microsoft Flow named “Inspiration Of the Week” :

1) Inform the team members to tweet their contribution item with media files in tweeter with specific “tag” let‘s say “#SharePointFest“. These items will be stored in specific excel sheet with predefined columns under the table and it will be considered as inspiration for others if manager approves.

2) Keep Two Excel files to maintain the data of contributions tweeted by team members as follows:

3) Create a Entity called “Popular Inspirations” in CDM to bind with the power app called “Employee Inspirations”.This app is accessible by manager who can promote the contribution furthers by posting in “Yammer” Group or SharePoint Online list.

Over all, We require to create 3 flows as follows:

Flow 1: Collect SPFest Contributions: This flow collect the twitter data in specific excel file located in One Drive For Business.

Prerequisites: Prepare the Excel file with following columns including the team leaders mailing list.Following data are separated in two tables.Remember, “Retweet count” column must be in number format otherwise, It will clash with the Re-tweet count parameter of twitter in flow designer.

Store this file “SharePointFestContributions.xlsx” into One-Drive for Business as per your desired location.I have stored into “Root>Employees Contribution” as shown in following screen:

Now, In order to create our first flow, get login into https://flow.microsoft.com/en-us/ with your work/School account and click on “Create from the Blank” button under “My Flows” tab and follow the steps as indicated in following video:

This flow will start collecting the twits whenever there is a new twit from employee including the media files to display as per the mapping of  twitter parameters with excel’s predefined columns.”Apply to Each” loop has been automatically applied by flow designed intelligence as media file can be the list of media as well.As soon as you have some data, the file will look like as you can see here -> sharepointfestcontributions Now let’s move to our second flow creation.

Flow 2:Inspiration Of The Week:This flow collects the contributions from the “SharePointFestContributions.xlsx” file which has re-tweet count more than 5 and store into another excel file “PopularInspirations.xlsx” with predefined table and send the consolidated items to Manager for his/her opinion every week.If manager approves, then the same data will be stored in CDM entity called “Popular Inspirations” in order to be displayed in Mobile App called “Employee Inspirations” , If it’s not approved, then comments will be sent to the team leaders individually as maintained in another table in “SharePointFestContributions.xlsx” file.

1. Prepare the Excel file with following columns inside the table.Remember, to keep “Retweet count” in number format.

Now we are ready to create the second flow as described above.To create this flow, perform the steps mentioned in following video:

This flow will start collecting the popular contributions as per the condition ( Retweet count > 5 ) from the “SharePointFestContributions.xlsx” and store into “PopularInspirations.xlsx” file every week as per the trigger mentioned in recurrence.Then, the same will be sent to the manager ( for demo purpose, I have mentioned my email ) to get the approval.If manager approves then, data from the “PopularInspirations.xlsx” file will be stored into CDM entity called “Popular Inspirations” otherwise, comments will be sent to team leaders as per the emails listed in “SharePointFestContributions.xlsx” in another table.

Let’s see the flow while debugging as shown in following video.To debug quickly, specify the recurrence time as 5 minutes:

Here, We saw how the data is flowing from one service to another and on approval by manager, data is getting stored in specified entity in CDM. You can also debug the flow if manager rejects the file which i haven’t presented in above video. Now, time to check up on the final flow which we will be integrating with Power Apps.

Flow 3: Post Inspiration :This flow is integrated with Power Apps, which will post the message about the selected contribution to SharePoint online List and Yammer Group. 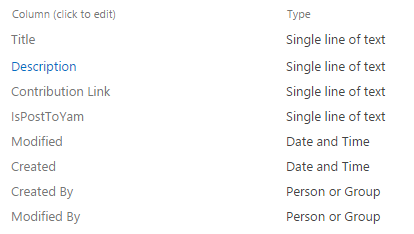 2. Create Yammer group named “Inspiration Of The Week” as mentioned in following screen:

Then, create the flow and integrate that with the Power Apps.I have already created  mobile app that displays the data which are bind with “Popular Inspirations” entity.And, the flow called “Post Inspirations” , I will associate on each item in the app which allows user to post the same item to yammer and SharePoint online as presented in following video:

As a result of flow association with power apps, whenever user click on selected item, actions will be performed as defined in the flow designer.

Furthermore, you can also delete the specific records after particular actions as per your need in order to keep the flow running smoothly for consequent runs and that’s it !!

For further information about Microsoft Flow, check my presentation here.

Hope you have enjoyed this demonstration of the combination of three separate flow to implement the business process.Wish you a great start of the Year 🙂